Drives up to 12 traffic signal lamp circuits (4 phases). One or two SSC Power Boards can be driven by a SBC-2400 traffic controller.

The SSC Power Board (made by Trafictec) provides the AC power needed to drive up to 12 separate traffic signal lamp circuits (4 phases). It is ideal for use with the SBC-2400 Traffic Controller CPU, but can also be used with other traffic controllers. Two SSC Power Boards may be connected to a SBC-2400 Traffic Controller CPU to control up to 24 traffic signal lamp circuits (8 phases).

The SSC Power Board converts the logic level signals it receives from the traffic controller to 110 or 220 VAC outputs to drive lamp circuits. All AC inputs and outputs are fused separately. The power board also has a separate output and a fuse for an external fan. Power for the SSC Power Board is provided by an off-the-shelf, regulated 12 VDC power supply capable of at least 15 Watts (available as an accessory).

Two field-wiring connectors are located at the lower edge of the SSC Power Board and are detachable, with a female “header” soldered to the PCB and a mating removable male “plug,” which acts as the terminal block for the field wires. Detachable connectors simplify board replacement because the individual field wires do not have to be disconnected from the terminal block. 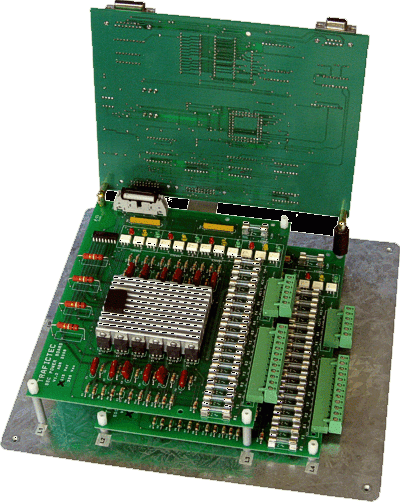 SBC-2400 Traffic Control Assembly with SBC-2400 CPU Board (top) and two SSC Power Driver Boards (below) to handle up 24 signal heads. The CPU Board is hinged to provide access to terminal blocks, fuses and LED indicators.

The Trafictec SSC Power Board has 12 signal lines that are connected to the controller CPU board via a 20-pin IDE connector on the right edge of the power board. Each signal line corresponds to one of the 12 lamp outputs and is protected by a dedicated fuse. There are 4 phases per power board, each with a red, yellow and green output. When the traffic controller grounds a signal line to the power board, an opto-coupler turns on a triac, which completes the lamp circuit. Mounted next to each of the 12 opto-couplers is a red, yellow or green LED, which turns on when the triac for that phase is on. The LEDs aid the technician when troubleshooting problems.

The Power Board design also includes a fuse monitor circuit, which monitors the 4 fuses used to protect the “red” outputs. If this circuit detects that one of these 4 fuses has blown, it grounds a signal line that is connected to the traffic controller. If the controller detects that this line has gone low, its software will put the intersection in flash or take some other action based on the failure notification.